I’m not sure I would be here if it wasn’t for Billy Graham. I don’t say that as a matter of mere sentiment, but as an objective observation. Although Millennials such as myself have only lived in the twilight years of Billy Graham’s life and ministry, his influence on previous generations has reverberated down to our own. On a personal level, Graham’s simple but powerful Gospel presentations played a key, instrumental role in my mother’s transition from an embittered, angry skeptic that was jaded against Christianity to a person transformed by the love of Jesus Christ at the cross.

Billy Graham joins the likes of R.C. Sproul and Nabeel Quereshi in the ranks of recent Christians that have left us in the past few months. He died just months short of his 100th birthday. And yet his legacy continues to live on. When the likes of both Barack Obama and Donald Trump go out of their way to take to Twitter side-by-side and pay their respects to a man like Graham, it says a lot about that man’s character and reputation. Even those that disagreed with him highly respected and esteemed him. When he made a mistake, he owned up to it, and his apologies were almost immediately and resoundingly accepted. And, of course, he preached the standard Gospel message: that we are all equally sinful and in need of divine grace and forgiveness, and that grace and forgiveness is open to everyone who accepts it.

And yet, perhaps Graham’s most salient contribution to the contemporary Church may be his approach to cultural engagement, something we would do well to remember.

Christian millennials have much to learn from Graham’s example in our contemporary context. Graham modeled for many young Christians what constructive cultural engagement looked like. Graham became the popular face of the fledgling “evangelical” movement in the 20th century, while others like Carl F. H. Henry and Harold J. Ockenga gave it intellectual rigor and credibility. 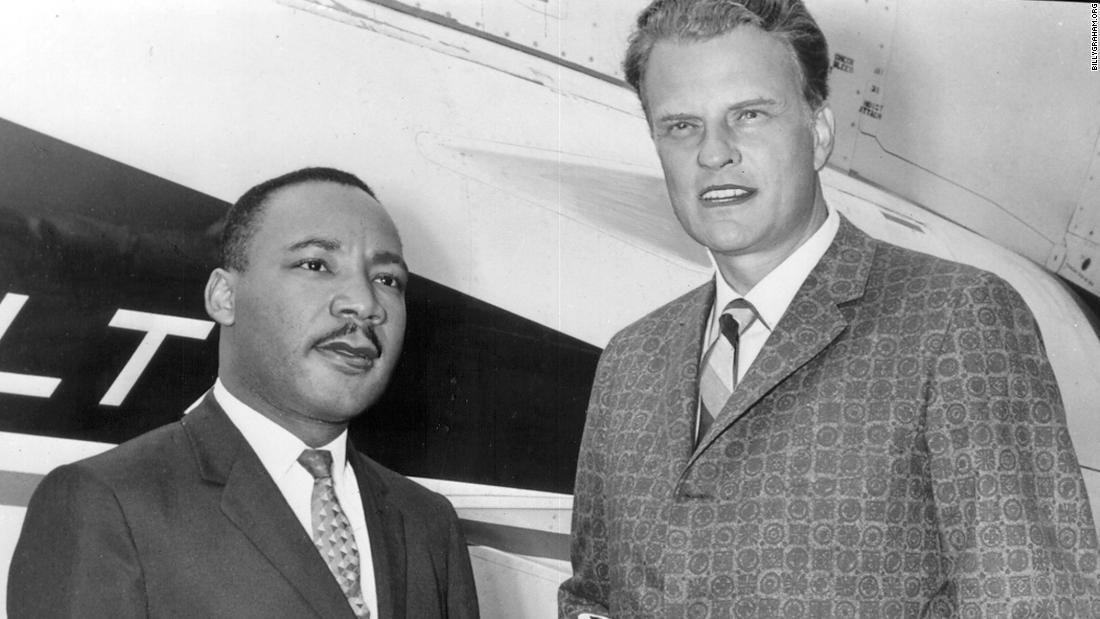 Now, I soberly acknowledge that to the average modern American, the term “evangelical” has come to elicit cringes and skin-crawling. In a previous blog post (“Taking Back Evangelicalism“), I used both etymology and 16th-century history to illustrate that “evangelical” has come to mean something completely foreign and alien to its original meaning (that is to say, overly politicized). And yet, I stopped just short of acknowledging Graham’s robust and constructive contribution to the “evangelical” discussion. Incidentally, I just addressed this at a paper I presented at Trinity Evangelical Divinity School’s academic scholarship program. Here is an excerpt:

Many people—both modern evangelicals and detractors—conveniently forget that the term “evangelical” originally rose to popular parlance in the mid-20th century as a viable alternative that differentiated itself from hardline fundamentalism on the one hand, and modernist liberalism on the other hand. As a matter of fact, fundamentalists used the word “evangelical” in a pejorative manner when referring to Graham and his cohort. On the right, Graham and his colleagues were attacked by the likes of Bob Jones of Bob Jones University. Further on the left, he was criticized by the likes of Reinhold Niebuhr.

In other words, fundamentalists thought that Graham had “compromised”. Modernists believed he was too dogmatic. There’s nothing new under the sun. Jesus and his disciples experienced both reactions.

Graham, Ockenga, Henry, and others opted for a more constructive and dialogical approach with their cultural surroundings. And unlike the fundamentalists, they were open to learning from the insights of secular disciplines while still upholding sacred Scripture as the ultimate, binding authority as the word of God revealed to us.

Fast forward decades later. What’s the current landscape? In my paper at Trinity, I concluded: “The situation today is not too different, except that modernist liberalism has been replaced by postmodern progressivism, and more importantly, ‘evangelicalism’ has [often] become the very fundamentalism that it once sought to distance itself from.”

I looked up to see nodding and bobbing heads among my audience of esteemed Christian thinkers and scholars at Trinity.

As other Christian writers like Trevin Wax and Tim Keller have lamented: “When I used the word to describe myself in the nineteen-seventies, it meant I was not a fundamentalist. If I use the name today, however, it means to hearers that I am.”

This is yet another example of how historical evangelicalism is differentiated from the contemporary conceptualization of “Evangelicalism” as a political voting bloc, and it was far from what Graham and his colleagues had envisioned.

Jonathan Merritt over at the New York Times respectfully dubbed Graham as the “The Last Non-Partisan Evangelical”–which, coming on the tails of the last (similarly titled) Star Wars movie, almost serves to echo Graham’s near-mythic legacy. Unlike Luke Skywalker in “The Last Jedi” however, Graham never became an embittered, cynical hermit–even when his age confined him to his cabin in the last years of his life. He never caught the common-cold of “religious-right” cynicism in regards to our secular culture. Nor did he become cynical of the evangelical movement that he had once helped steer. He remained steadfastly consistent in his approach to cultural engagement: presenting the age-old gospel of “Christ crucified” and sinners saved by grace without getting embroiled in political partisanship. Like Skywalker, however, the title does suggest that Graham’s is a dying breed among self-professed “evangelicals”.

When [Graham] was asked in 2007 why he never affiliated with Jerry Falwell’s Moral Majority, Mr. Graham replied: “I’m all for morality, but morality goes beyond sex to human freedom and social justice….Evangelists cannot be closely identified with any particular party or person. We have to stand in the middle in order to preach to all people, right and left.”

This sounds very similar to what I argued for in my very first blog post for the new generation of Christian millennials:

I hope to represent another approach that is separate and distinct from these two: one that adheres to orthodox, confessional Christianity (and the God that it professes) but also engages with the culture and cares about social justice.

For the record, I’m not trying to paint Graham as an avid social justice warrior, but as far as white evangelicalism goes, he was quite frankly far ahead of his time. In a time when segregation was still largely practiced and accepted within (mostly southern) Christian circles and churches, Graham instead decided to follow in the steps of Christian abolitionists before him by literally breaking down the barriers. Although he didn’t move quite as fast as his friend Martin Luther King Jr. would have liked, he did bring the inequality and plight of millions of black Americans to the attention of white churches. And this is germane to our time of racial tension.

As far as politics were concerned, Graham knew about the dangers of the allure of power and human institutions, and he learned that lesson along the way. If the man had any fault, it was that he could sometimes be a bit naive and trusting; and when Richard Nixon showed his true colors in the aftermath of the Watergate scandal, Graham was personally burned by the president’s two-facedness, having been a personal confidant of the president. Since then he made sure to maintain a healthy distance from political figures. Although he continued to meet with every president up to (and including) President Obama, he never formally aligned himself with any president’s political agenda thereafter. (Quite frankly, I wish his son would do the same.)

A Kingdom “Not of This World”

Why did Graham decline to be enmeshed in political parties? Graham came to realize what many Christians too easily forget–that God’s kingdom is “not of this world” (John 18:36). When Jesus said those words to Pontius Pilate in the Gospel of John, it was between breaths following a violent flogging by Roman soldiers, blood trickling down from the crown of thorns forced upon his brow. The humility of this image is contrasted with the powers of Pilate and Caesar, and echoing His kingdom-ethic of loving one’s enemies that He espoused.

“Don’t you know I have the power to release you?” Pilate said. Jesus declined. He had spent His life denying the power owed to Him, from the stable where He was born to the temptation in the desert where He was offered the world. He didn’t play by the rules of the world. Instead, He identified with the lowly. He did not come to be served but to serve, and to give His life as a ransom for many (Matthew 20:25-28). Christians would do well to remember His example.

Graham remembered that message. He recognized legislation could only go so far. He recognized that in order to bring about true change, you must first change hearts and lives. And hearts and lives are changed by the message of a God that loved us enough to allow Himself to be flogged, whipped, tortured, and crucified.

“I came close to identifying the American way of life with the kingdom of God,” Mr. Graham later told Christianity Today. “Then I realized that God had called me to a higher kingdom than America. I have tried to be faithful to my calling as a minister of the Gospel.” [via Merritt]

Evangelicalism as a Global Reality

It is this message of “Christ crucified” for our sins that Graham reached millions of people worldwide with. While white, Western society (i.e. Europe and North America) is growing less religious, that is not the case for the rest of the globe.  Evangelicalism, alongside resurgent Islam, is a growing reality in countries outside the West. Much of that has to do with the efforts of people like Graham. Though Americans tend to associate “evangelicalism” as a white majority political voting bloc, to the rest of the world outside of the West it means something completely different.

As I reflect on Billy Graham’s legacy and the state of evangelicalism, I retain some hope for the future. Graham reminds us (as others have pointed out) that evangelicalism is not simply a narrow, American majority reality–conflated as it is with partisan politics. It’s a diverse, multicultural, global reality. If we take a moment to take off our Western-tinted lenses, we may yet see the nail-scarred Middle-Eastern figure that evangelicalism is supposed to point us to.

So what does Graham have to teach us? The paper I presented at Trinity addressed the prompt: “What does it mean be evangelical in our contemporary context?” I conclude:

It cannot mean a return to what Keller calls the “fortress mentality” of 20th century fundamentalism, with its antagonistic stance towards society and cultural engagement. It also cannot mean the surrendering of classical orthodox doctrines or an unchallenged capitulation to cultural or philosophical trends, whether modernism or postmodernism. Like Graham, Ockenga, and Henry, it must be a “third way”—one that holds onto classic, orthodox Christianity, and yet engages constructively and dialogically with the cultural environment. In this sense, among a country that has tired of the word “evangelical”, perhaps it’s time to resurrect the “neo-evangelicalism” of Ockenga. Perhaps the born-again movement must itself be born-again with these values in mind.

Spoiler alert: Luke Skywalker ended up not being “the last Jedi”. I’m hopeful that Graham won’t prove to be “the last non-partisan evangelical”, either. I know plenty of Christian millennials that prove my point.

Godspeed, Billy. I’ll see you someday. And thank you.