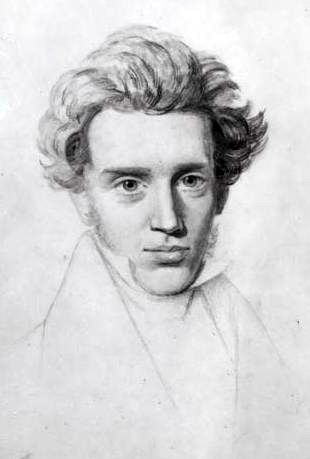 I have entered what you could call a distinctly “Kierkegaardian” season of my life. What do I mean by that?

Well, first, let me introduce the object of today’s spotlight: 19th century Danish existential philosopher and theologian Søren Kierkegaard, who constantly challenged the status quo of his day. If you want to get your mental circuits tied into a knot, read anything he writes, and I promise that you will be challenged (and often confused!) to think. Long before Nietzsche stepped onto the stage, existential thought found its origins in a committed Christian philosopher (though I would argue Ecclesiastes is a far more ancient precursor–there truly is nothing new under the sun!;)). He took Socrates’ advice to heart in living a thoroughly examined life, sometimes to the extreme. While not exactly 100% orthodox in the entirety of his thinking, he did serve as the precursor or inspiration to some of the neo-orthodox theologians of the 20th century (e.g. theological giant Karl Barth).

While I can’t always 100% jive or align with absolutely everything he says, he resonates with me on a very deep level, and I am profoundly indebted to him in my thought life. I started opening his books about two years ago now and still find myself wrestling with them. So what do I mean when I say that I have just now entered a “Kierkegaardian season” of my life? The answer to that question (I’m getting there, I swear!) is important not merely as an exercise in prose, but because it relates to the goal and purpose of my blog. Let me explain.

As I’ve written about previously, this year I decided to forgo a promising doctoral program in clinical psychology in favor of a formal seminary education, which I await for this Fall (2018). While I am working in the meantime, I have no projects that I am inherently expected to devote myself to. I come home to no homework to work on, no papers to write, no exams to study for. This “in-between” season in preparation for seminary has led to some deep introspection on my part, something that Kierkegaard would approve of. And, much like Kierkegaard, I have decided to use this new spare time that I have on my hands to take up my pen (or, in this case, my keyboard) and write. But not just writing for writing’s sake. Like Kierkegaard (and as I’ve stated before), everything I write is ultimately in service to the global Church. And, like Kierkegaard, this doesn’t always come in the neat and tidy form you’d expect.

Kierkegaard’s writing in service to the Church often came in the form of polemics against the status-quo Christendom of his day, or what we might call “cultural Christianity”. For Kierkegaard’s time, that meant that “everyone” in his day was supposedly a Lutheran, because they were baptized as *infants into the Lutheran state-church of Denmark. This usually had the consequence of producing things like “dead orthodoxy” or what Dietrich Bonhoeffer would later call “cheap grace” in the 20th century. It also usually led to apathy, complacency, and presumption of God’s favor as a license to live whatever type of comfortable life you wanted, without the necessity of a personal, subjective encounter with the living God. This was a problem, Kierkegaard thought, and he wanted to wake the Church up from its dogmatic (and spiritual) slumber by ringing the proverbial church bells.

Though in many ways, the cultural climate of today is exactly opposite of Kierkegaard’s, I also write in response to some of the Church’s less-than-helpful tendencies of late, and to question the status-quo of our time. More specifically, I started writing this blog partially in response to the last vestiges of Kierkegaard’s ‘Christendom’ in the modern West, as it takes its last-few desperate and dying breaths. What do I mean by that? Many Christians, especially in the far-right, find it hard to come to terms with the fact that we live in a largely secular age, and the ‘Christendom’ of years past is long gone. And yet, the specter of that time still haunts their consciousness. The subsequent result is often reactionary and knee-jerky rhetoric on their part toward secularization, so as to be counterproductive (especially in the political and legislative spheres). Now, like Kierkegaard’s time, Christianity (and big-E “Evangelicalism” in particular) in parts of the country like the Bible-belt has become the “cultural Christianity” and “folk religion” that retains some of its conservative values and presuppositions; but it nonetheless is often devoid of the true heart-and-life-change that comes from an encounter with God. (This means, among other things, that many vote Republican but don’t necessarily feel the need to live a life of discipleship and love.) As a result, they presuppose (and impose) these values onto our larger secular culture for its own sake, and expect the rest of the country to automatically follow suit without others first having an encounter with God to begin with. This has led to what others have perceived as just more religion, a list of do’s-and-don’ts, instead of a life of heart-transformation and true surrender to the personal God of the Bible that precedes any change. Kierkegaard’s Attack on Christendom (much like Bonhoeffer’s “religionless Christianity”) was not a departure from historic Christianity, but rather a call to recover the heart and soul of Christianity. We would do well to glean some helpful insights from them.

I have written previously about how our current cultural climate is no reason to panic (though there are some valid concerns). If anything, it opens up new opportunities to evangelize the Gospel if we adapt accordingly, especially because of the very fact that less and less people just assume that they are automatically “Christians”. The way I see it, this can lead to a far more genuine, authentic Christianity. (For the record, my generation is obsessed with authenticity, sometimes to an unhealthy extreme–read Charles Taylor’s “A Secular Age“). To the few that have engaged with me since starting this blog, it has served as a microcosmic rallying cry for those that have been discontent with the state of the “American” church. Yet I also hope that it provides a necessary corrective to some of the syncretistic, relativistic, heterodox impulses I have often found in many Christians of my generation.

Why should we listen to old, dead philosophers and theologians of times past? Simply because they still have something to teach us. It helps us examine our faith and belief. You see, Kierkegaard was concerned with living the “examined life” that Socrates encouraged; and he was also concerned that the (state) church of his day was not living that examined life, or faith, and thus had lost the heart of Christianity. Contemporary, grassroots evangelicalism in particular runs the risk of living the “unexamined life” by shutting the door to the voices of the past, whether its Kierkegaard, or Bonhoeffer, or Augustine, or Ireneus, or Athanasius, or Thomas, or Anselm, or Luther, or Calvin, or Edwards, or Whitefield, or Wesley, or Spurgeon…(C.S. Lewis might be a notable–and cliche’d–exception). The voices of the past still have something to teach us.

Kierkegaard made quite a splash in placid Christian waters in the 19th century (and to the present). I have no illusions that my blog will accomplish nearly the same effect, especially in such an age of social/mass media (see my disclaimer in my first blog post). I’ll just be another voice in a sea of others talking at the same time (and often over each other). But the fact is, I have a voice. And I might as well use it. I think in that sense Kierkegaard would be proud.

*Author’s note: This is not a polemic against infant baptism (although I am personally not a paedobaptist). Rather, it is a comment in being baptized into a state-church and assuming that one was automatically a “Christian” because they were Danish.

7 thoughts on “Ode to Kierkegaard”